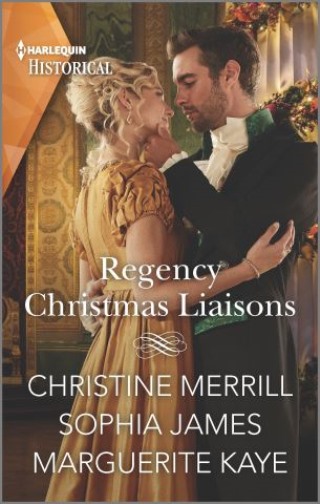 In Unwrapped under the Mistletoe by Christine Merrill, Charles is hired to catch supposedly light-fingered poor relation Daphne, but steals a kiss under the mistletoe! In One Night with the Earl by Sophia James, widow Elizabeth seeks refuge for herself and her young twins. Brooding Lord Grey might just provide that Christmas miracle! And in A Most Scandalous Christmas by Marguerite Kaye will the dashing stranger who Lady Sylvia scandalously joked with about a Christmas liaison make good on his promise?

From Harlequin Historical: Your romantic escape to the past.

Christine Merrill: Christine Merrill wanted to be a writer for as long as she can remember. During a stint as a stay-at-home-mother, she decided it was time to “write that book.” She could set her own hours and would never have to wear pantyhose to work! It was a slow start but she slogged onward and seven years later, she got the thrill of seeing her first book hit the bookstores. Christine lives in Wisconsin with her family. Visit her website at: www.christine-merrill.com|||Georgette Heyer novels formed Sophia James’s reading tastes as a teenager. But her writing life only started when she was given a pile of Mills & Boons to read after she had had her wisdom teeth extracted! Filled with strong painkillers she imagined that she could pen one, too. Many drafts later Sophia thinks she has the perfect job writing for Harlequin Historical as well as taking art tours to Europe with her husband, who is a painter.|||Marguerite Kaye has written over fifty historical romances featuring feisty heroines and a strong sense of place and time. She is also co-author with Sarah Ferguson, Duchess of York, of the Sunday Times bestseller, Her Heart for a Compass. They are currently working on their second book together. Marguerite lives in Argyll on the west coast of Scotland. When not writing, she loves to read, cook, garden, drink martinis, and sew, though rarely at the same time.